I am currently deep diving into the whole TrustSec architecture. It has quickly become apparent to me, that i need to lab alot of this out in detail. That means upgrading my homelab with a 3650 switch as well as a refurbished laptop for acting as the supplicant for Dot1x operations.
Read more...

Today I made the decision to drop my next lab date for the CCIE Security V6 lab exam. Why? Im simply not ready for another attempt yet and im not sure im going to be ready for the V6 before they transition to V7.
Read more...

Hi Folks, I wanted to take a few moments to share an idea I learned way back. Its very simple, because its the simple of act of “investing in yourself”. What I mean by that is, that you should set aside some amount of $$$ each year and use that to further educate yourself in a suitable area.
Read more...

So a couple of days ago I was going through the CCIE Security training videos on Cisco Learning Network and I noticed a golden nugget. It was mentioned that Cisco was on track, to release some learning labs for practice use for the CCIE Security lab exam!
Read more...

Its been almost a year since my last post. Wow, do I feel bad about that! :( Anyways, ive been studying on and off for the last year and I was scheduled to have my first lab attempt this coming thursday.
Read more...

So I have had some time to put everything together in my small CCIE Security V6 lab. I want to spend a few moments explaining how everything is put together so others can benefit from it. At the core of the whole thing is my new server, which is running great!
Read more...

This is the sequel to what was my first introduction to Forward Networks a year ago at Cisco Live Barcelona 2019. No surprise that, since I put their presentation among the highest rated during that time, that I was really looking forward to an update on their technology.
Read more...

I am very happy to announce, that I have been invited to attend “Networking Field Day #22”. As you might know, the Tech Field Day events are all about getting a bunch of people together to figure out what the presenting companies are all about, with the products they bring to the table.
Read more...

The Concept: In legacy site to site (S2S) VPN’s we are used to defining crypto maps and applying them to a physical interface. However, since these does not utilize GRE, you have no way of supporting multicast and routing protocols.
Read more...

I am catching up on my RSS feeds and fell upon Ivan’s post on “Hard Work”. The article references Seth Godins post Hard Work, which examines 3 types of work being carried out. In summary we have the following types:
Read more...

In this post I will go through an example of setting up redundancy between a pair of ASA’s using one of the two methods of accomplishing this. The 2 methods are: Failover Clustering This post is exclusively about the failover option.
Read more...

So I have further evidence that I might be crazy: I have decided to abandon any and all CCIE DC studies. Why you might ask? Simple: I dont have access to the required equipment continually so I can practice and reinforce any knowledge.
Read more...

This week, I am attending Cisco’s EMEAR Enterprise Networking PVT in Amsterdam and I wanted to highlight some key takeaways. Cisco is really doubling down on getting its software strategy in place. Everything, and I mean everything gets a mention in regards to what sort of software is enabling it (DNA Center/SD-Access/SD-WAN etc.
Read more...

I decided a while back I would spend a bit of time learning about the Cisco ASA firewall. This is the first post surrounding some technologies I have explored during that time. For some of you it might be easy stuff, but for others, including myself, might find it interesting for reference.
Read more...

Forward Networks was one of the top presenters at TFDx at Cisco Live 2019 in Barcelona in my opinion. I really didn’t know much about what they were all about before we had the presentation. One thing I did notice was that they were really organized, even handing out agendas before beginning the presentation.
Read more...

Time to say goodbye to Barcelona

As im sitting here in the hotel, waiting to leave for the airport, the only thing on my mind is: Wow.. what an amazing week this has been. I have met so many old friends and made a bunch of new ones.
Read more...

In just 3 days time I will be leaving for Cisco Live 2019 in Barcelona. Im thinking about what sort of event it will be and what to expect in term of announcements. Especially one thought keeps reappearing and thats the thought of the transformation of Cisco.
Read more...

I am honoured to have been selected as a delegate for Tech Field Day during Cisco Live Europe 2019 in Barcelona! Cisco Live Europe will take place from the 27th of January until Friday 1st. I am really looking forward to this opportunity.
Read more...

I was fortunate enough to be selected as a Cisco Champion for 2019. Looking forward to alot of good information and cooperation from the program! 🙂 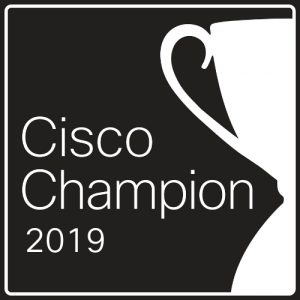 Practical OTV ————- This post is all about OTV (Overlay Transport Virtualization) on the CSR1000v. I wanted to create the post because there are alot of acronyms and terminology involved. A secondary objective was to have a “real” multicast network in the middle, as the examples I have seen around the web, have used a direct P2P network for the DCI.
Read more...

I recently decided that i would like to utilize Observium as well as rancid for configuration backups on my home network. To that effect, the following links really helped me out getting it all setup correctly: https://docs.observium.org/rancid/ http://packetsandpings.blogspot.com/2013/05/installing-and-configuring-rancid.html https://layer77.net/2016/08/10/upgrading-from-rancid-2-3-8-to-3-4-1/ Let me know if you run into anything i might help out with.
Read more...

A quote from an Ex-Googler

I really like this paragraph, because almost everyone wants to imitate google. Why? well, the answer to that questions seems to be what everyone is missing! Google’s solutions were built for scale that basically doesn’t exist outside of a maybe a handful of companies with a trillion dollar valuation.
Read more...

I recently completed the entry level Juniper certification. I thought it would be a good idea to study for something other than the mighty Cisco, so Juniper’s JNCIA-Junos seemed like a good choice. It was a very fair exam I can highly recommend.
Read more...

By now, VxLAN is becoming the standard way of tunneling in the Datacenter. Using VxLAN, i will show how to use the CSR1Kv to extend your Datacenter L2 reach between sites as well. First off, what is VxLAN? It stands for Virtual Extensible LAN.
Read more...

In this post i would like to highlight a couple of “features” of ISIS. More specifically the authentication mechanism used and how it looks in the data plane. I will do this by configuring a couple of routers and configure the 2 authentication types available.
Read more...

Hello folks, Im currently going through the INE DC videos and learning a lot about fabrics and how they work along with a fair bit of UCS information on top of that! Im spending an average of 2.5 hours on weekdays for study and a bit more in the weekends when time permits.
Read more...

New Server: So I just completed a purchase off eBay for a new server for my lab purposes. For a while now I’ve been limited to 32Gb of memory on my old ESXi server, which is really more like 20Gb when my regular servers have had their share.
Read more...

A look at Auto-Tunnel Mesh Groups

In this post I would like to give a demonstration of using the Auto-Tunnel Mesh group feature. As you may know, manual MPLS-TE tunnels are first and foremost unidirectional, meaning that if you do them between two PE nodes, you have to do a tunnel in each direction with the local PE node being the headend.
Read more...

In this post, I will put together a variety of different technologies involved in a real-life DMVPN deployment. This includes things such as the correct tunnel configuration, routing-configuration using BGP as the protocol of choice, as well as NAT toward an upstream provider and front-door VRF’s in order to implement a default-route on both the Hub and the Spokes and last, but not least a newer feature, namely Per-Tunnel QoS using NHRP.
Read more...

I am fortunate enough, to be able to goto Cisco Live US! again this year. Last year was such an experience, that my hopes are really high for this year as well. I will be arriving on Friday the 8th and leaving on the 15th.
Read more...

Wow, what a busy month this has been! So I started my new job on February 1st and thus far, everything has been really great. My new coworkers are very friendly and helpful. I’ve spent the better part of february, trying to get to grips with the SP network I will be focusing on from now on.
Read more...

This post is my follow-up on a recent discussion on twitter. Working for a VAR (Value Added Reseller) is not always the glamours life some make it out to be. Working as a consultant, what you are really doing, is being the CEO of your own service company.
Read more...

Even though im still in San Diego, Cisco Live! US 2015 is but a memory. But what a memory it is! It being my first time attending a Cisco Live conference, I didn’t really know what to expect. What I was met with, was a conference full of really sharp and nice people.
Read more...

This is my current schedule for the Cisco Live US 2015 event. Most are related to my CCDE studies and a few are with technologies and products that im interested in in general. Monday: 08:00 – 09:30 BRKSAN-2101 FCoE for small and mid size enterprises.
Read more...

Just wanted to let you know that Daniel from lostintransit.se is doing a webinar on network design. I will be attending and helping out any way i can.

Woke up to a very nice email today.

I have been selected as a Cisco Champion for 2015! – Now i get to see what all the fuzz is about and hopefully be able to contribute something. In this post id like to provide an example of a fairly new development to EIGRP which is called EIGRP Over The Top (OTP). In all its simplicity it establish an EIGRP multihop adjacency using LISP as the encapsulation method for transport through the WAN network.
Read more...

In this fairly short post, id like to address a topic that came up on IRC (#cciestudy @ freenode.net). Its about how you select a route thats being redistributed into an OSPF NSSA area and comes into the OSPF backbone area 0.
Read more...
Site by Kim Pedersen - 2006-2023
Powered by Hugo and Whiteplain